You want numbers? We’ve got em.

A start up ecommerce company was looking to start using Facebook ads to connect with their ideal customer and sell more of their product.

We used our 3rd Party Data provider to find their ideal customers and then came up with compelling ads that drove users to not just click on the ad but to actually purchase. During the 43 days we helped them generate $1,046,438 in sales on ad spending of $224,005 which resulted in a return on ad spend of 4.67. That resulted in over 1,427 new customers with an average order value of $733.31.

A holiday store was looking to up the sales of their online store during their busiest time of the year. We built beautiful HTML5 banners which pushed the unique selling points to folks no matter the device they were on.

A ecommerce client of ours was looking to increase their ROAS on Facebook. We built a campaign that leverages the new Facebook Shop style ads and saw a tremendous return of $192,433.60 in sales from only $32,540.63 in ad spend.  The ads are highly effective since they will either keep the person in app to complete the purchase or send them to the linked Shopify store.

A high ticket consultant had his in person business decimated by Covid-19. He came to us to help digitize what he was doing live and in person.

We leveraged his brand loyalty and came up with a direct response sales letter that we then drove our 3rd party data audiences to. He was able to generate $349,495 in consulting income all on ad spend of just $28,705.14. It resulted in an impressive 1,117% ROI on his ad spend which comes out to a 12.17 ROAS (Return on Ad Spend).

We went quality over quantity and that is a key secret sauce in how we were able to unlock these type of returns with Facebook ads.

A holiday ecommerce store was looking to update the entire look and feel of their existing Shopify store. We got to work and redesigned the entire website to ensure a mobile first push but also made sure the entire buying process from searching to checkout was super clean and crisp on all devices.

As a result the client saw a 190% increase in sales for the same period Year over Year which also resulted in a 111% increase in the conversion rate. The site also saw the AOV (Average Order Value) jump by 19% all with only an increase in traffic of 21%.

A high ticket consultant wanted to launch a live webinar event but wanted to entice folks to signup for free. After someone signed up they were presented with an upsell offer at $55 and then a final upsell for $295.

We came up with the Facebook Ad campaign to make sure we enticed the right business owners who would be interested but also be willing to get both upsell offers. Our campaigns returned a hefty 11.44 Return on Ad Spend which turned $14,984.97 into $171,375.00.

A startup ecommerce company was looking for Google Ads experts to grow sales for their new products.

We used advanced bidding strategies and numerous campaign types (Search ads, Display, Youtube, & Google Shopping) to find their ideal customers and drive purchases on their website. In the 41 days since starting on the account, we helped them generate $699,386 in sales on ad spending of $149,077 for a return on ad spend of 4.69. We’ve been able to find over 1,900 new customers so far and we’re now growing their business to millions of dollars in sales.

A SaaS company that caters to publishers wanted to get a better return on their ad spend. They were seeing a healthy 3.33% Return on Ad Spend but they knew there was more potential.

We came in and revamped the entire strategy to put more heavy emphasis on remarketing and it paid off with a huge decrease in CPA from $28.92 down to $19.69. This client is currently in scale mode with a 566% return on ad spend! What other investment can you make with that kind of return?

This client developed an AI email automation platform that increases retailers return on email marketing. They target Fortune 500 retailers but they were having a very hard time getting a foot in the door. They had a large prospecting base and the sales team attempted to reach out via calls and email without engagement.

A strategy was developed that used their existing prospects and shifted the marketing efforts from outbound to inbound. This allowed the sales team to spend more time on those hot and warm leads and less time trying to figure out a way to get someone to raise their hand.

A client in the home products industry sold one of the hardest things to sell online, Kitchen Cabinets. Their past results were satisfactory, but the client knew that the return on investment could be improved.

The new revamped marketing strategy we developed was able to push customers through the sales process faster, for quicker sales and more revenue. The client was able to generate $517,777.34 in revenue on and spend of just $14,528.65 which resulted in an ROI of 3,463% for a 3 month time period.

A leading credit card merchant retailer was only getting new leads into their main credit card processing business after they bought one of their products. That limited their potential upside since the e-commerce store only sold so many products. Yet their target market was not looking for their product very often.

We developed a strategy to get the business owners attention and raise their hand to see how they could save on credit card processing.

A digital membership site was only doing traditional PPC advertising and email marketing and they wanted to ramp up other channels such as Facebook.

We came on and developed a robust strategy for lead generation all the way through purchasing. We developed and launched various campaigns that ended up delivering $151,086.79 in sales on ad spending of only $25,966.29. The client saw a great ROI of 460%. 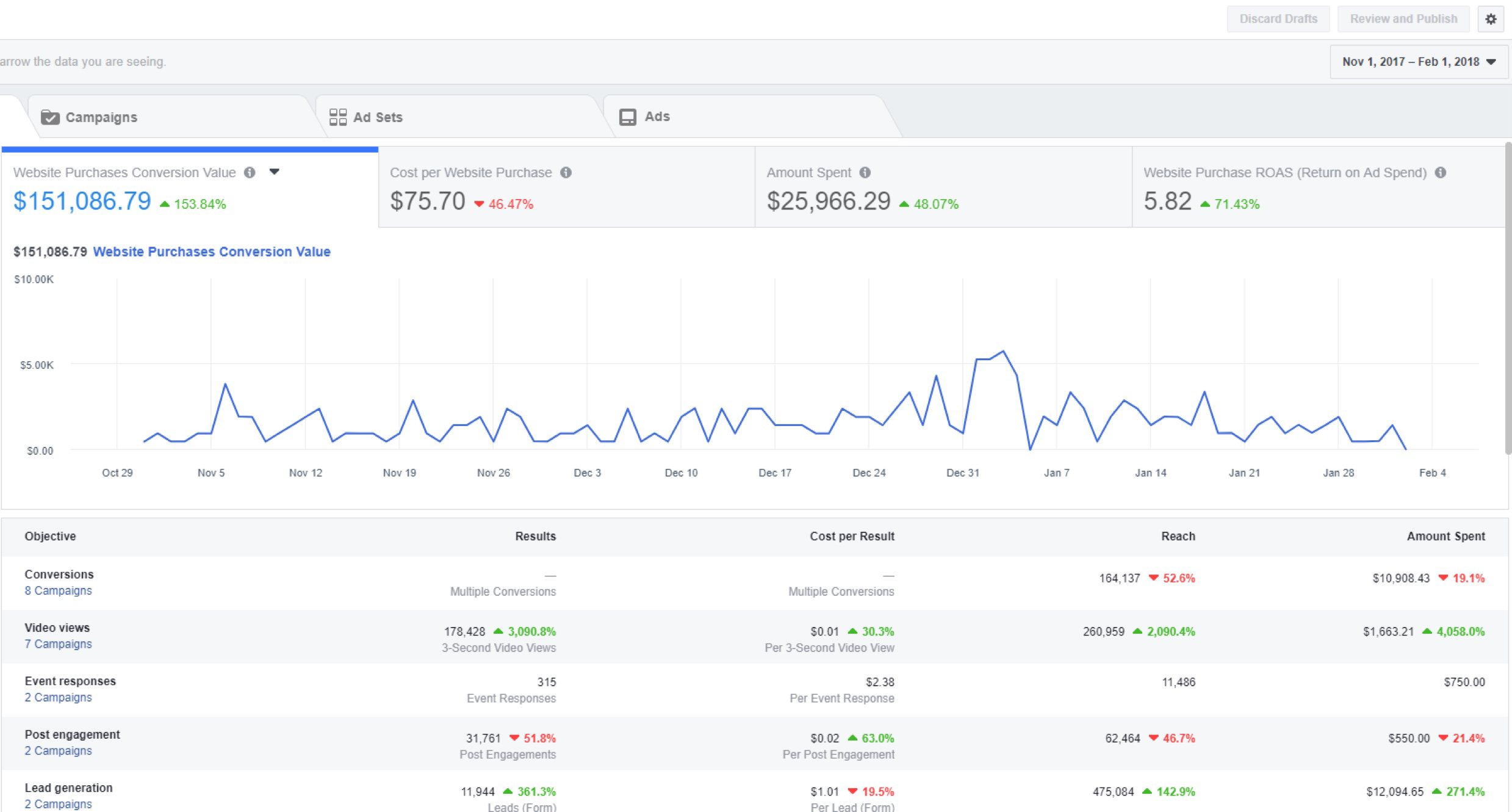 A business SaaS company came to us because the existing ads manager was not testing new ideas and was just barely profitable.

We immediately turned off all of the bad performing ads and created brand new ones that were geared for specific results. We also developed a video ads funnel that warmed up the audience that helped drive down the CPA.

We created a top of funnel, middle of funnel and bottom of funnel approach to blanket the target market with high engaging ads. That resulted in 19 direct sales with an average order value of $1,318.

A client in the women’s fashion industry was selling primarily through Facebook Lives.  They were doing on average $50,000 a month all organically but wanted to grow with paid ads.

We can up with a strategy that would amplify their existing Facebook Lives but target new potential clients.  Our strategy resulted in a healthy 4.29 Return on Ad Spend for the 60 day period.  That resulted in a 329% ROI and gave them sales of $76,950 on ad spending of only $17,922.

The same conference we also ran Google Ads for in conjunction with the Facebook Ads campaign above. The same 1 month period we saw $37,672.40 in sales on PPC search spending of $2,288.95.

Those numbers resulted in the ROI coming in at 1,545%.